※Please note that this article contains my feedback about now-releasing “Detective Conan: The Scarlet Bullet” and some spoilers about Akai family. Please refrain from reading it if you don’t want to know this info. 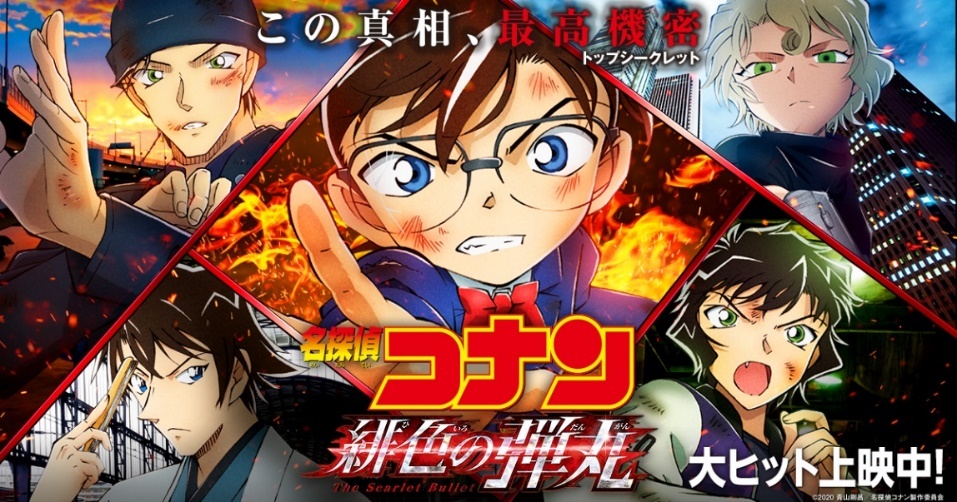 This article is for those who want to know my feedback from Detective Conan’s latest movie, The Scarlet Bullet, and want to review some before watching this movie!!

What Is Detective Conan: The Scarlet Bullet?

The movie, Detective Conan: The Scarlet Bullet, is the 24th Detective Conan’s movie series. It was originally scheduled to release in spring 2020, however, because of the pandemic, it was extended to April 2021.
It’s been a year since it was announced, so this movie had a great opening weekend with 144% increase of the first day’s box office, compared to the previous year. It might bring in over 10 billion yen??? Now, it’s still going viral in the theater!

I’ve heard from one of the Goods Republic’s members that she got a newly-drawn illustration by Aoyama Gosho-Sensei as a special gift at the theater when she went there to watch a couple days after the release date, even though I didn’t get such a service when I went there on the release date……! I’m so jealous~!! 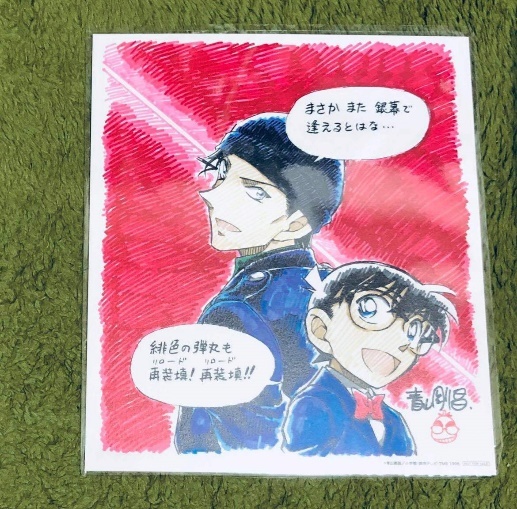 Detective Conan: The Scarlet Bullet!
It Consists of These Three Themes!

So! The movie consists of the three themes! You will enjoy the movie even more if you know this in advance! 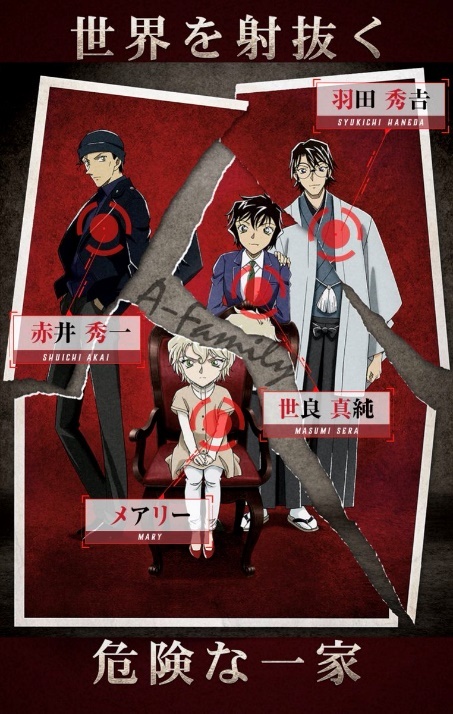 This family plays the most important role in the scenario of this movie (see below for more details). Each character deals with each incident that happens in the movie in a different way of approaching. 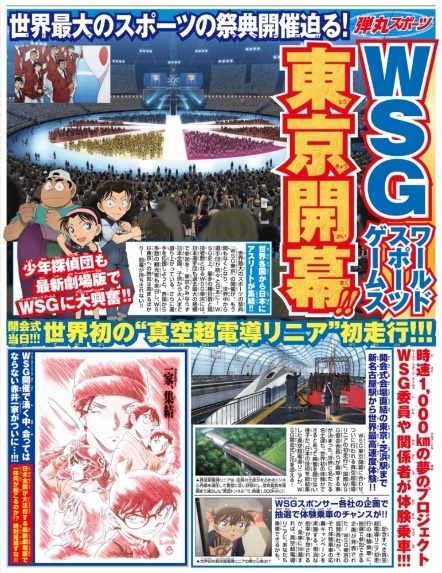 This is the biggest sports festival in the world, which takes place in the story.
It has the longest history and has taken place in various countries. This time, Japan hosts this festival. As the sponsors, many celebrities or CEO from well-known companies around the world, are usually in charge. 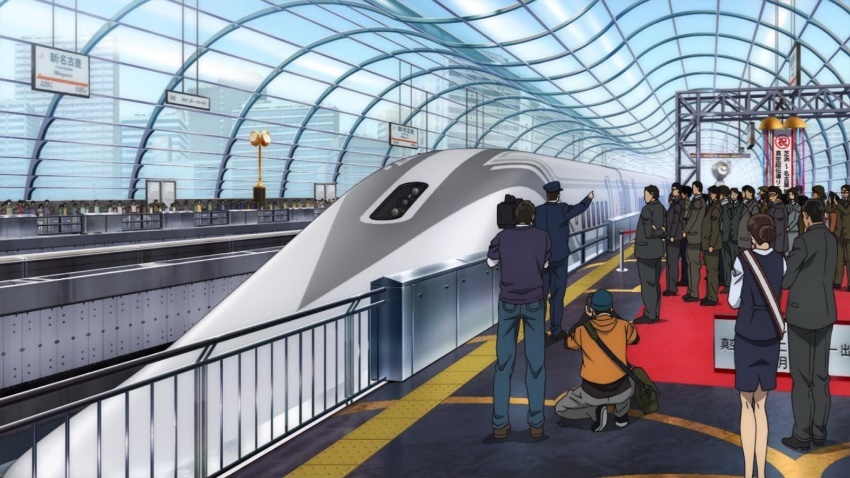 It’s an electric linear, developed in Japan, for the sports festival, WSG.
It reached a speed of 1,000 km/h, which is the world record, using the vacuum superconducting magnetic system. On the day of the festival, WSG, this linear will run to Tokyo with very important passengers. Since this metal ride’s speed is incredible fast, it’s also called “Japanese Bullet.”

During this worldly-famous sports festival, an incident will happen behind the scenes……!
Well, here are some elements, which I should have prepared for more, before I watched this movie!

【Spoiler Alert】
Who knows what!?
Reviewing info about Akai Family! 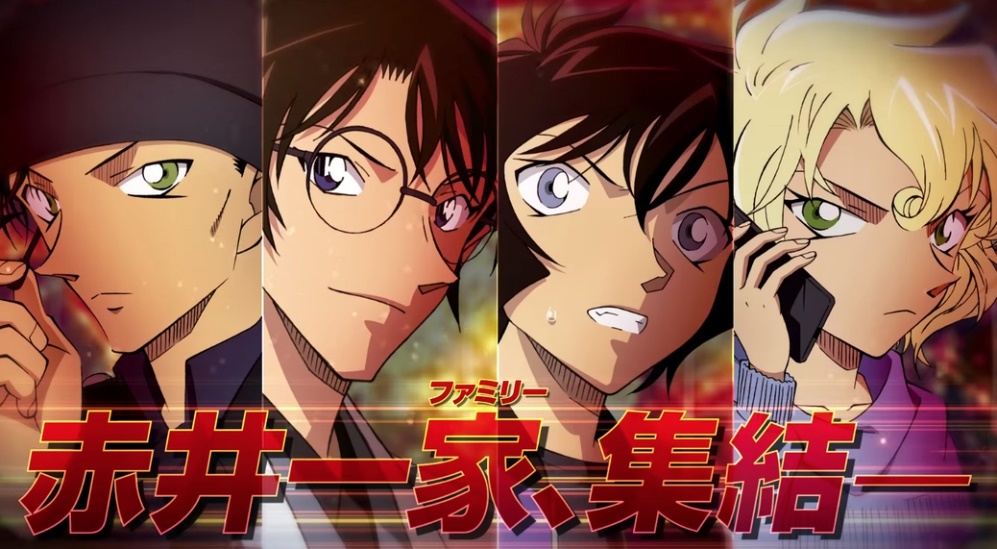 This one is not about the movie itself but about the main story of Conan up until the latest volume, so please watch out for the spoilers!

Akai Family in this movie is the key characters but the element, where “who knows what?” was unexpectedly important! So let’s check out Akai Family’s background and which chara knows what! 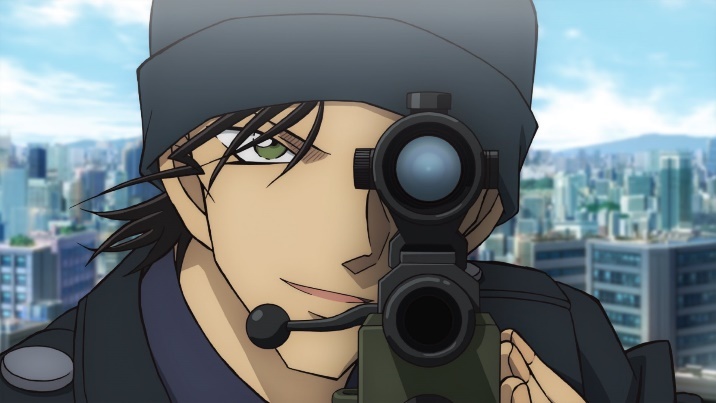 https://goodsrepublic.com/product/tag_page.html?tags=31657
He is the oldest boy in Akai Family. 32 years old.
He is an FBI agent and extremely skillful at shooting and Jeet Kune Do. He is a major figure in the battle against the “Black Organization.”
In the main story, he pretended to be dead and now he is active, disguised as a man called “Okiya Subaru.” Few people know the fact that Akai Shuichi is Okiya Subaru. 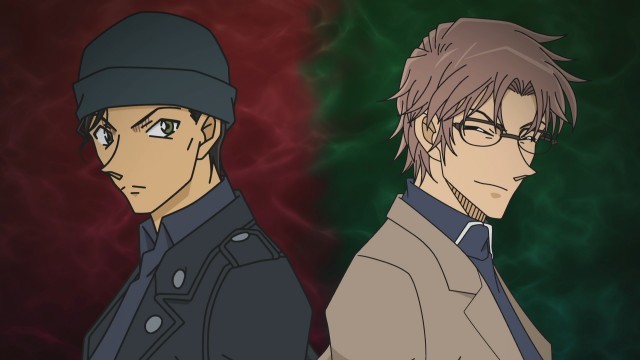 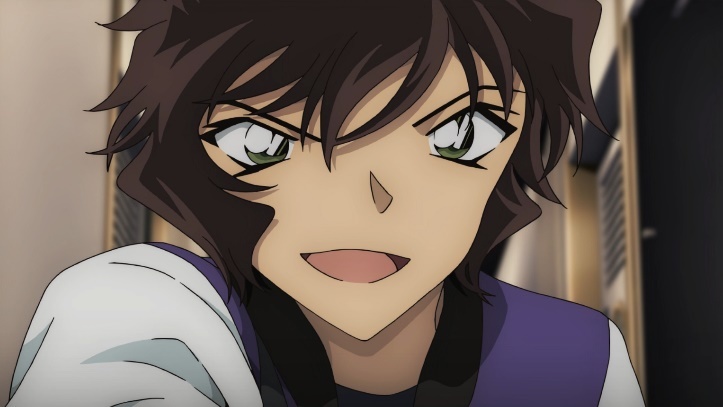 https://goodsrepublic.com/product/tag_page.html?tags=146513
She is the oldest daughter of Akai Family. She is a high school detective.
She has studied abroad in England but currently goes to high school, living in the hotel. She is also very skillful at Jeet Kune Do and her battle ability is high. Her detective skill is high but sometimes she cannot deal with incidents perfectly due to lack of her experiences.
She currently lives in the hotel with her mother, who has got deformed just like Conan. By the way, Sera is her mother’s maiden name.
She thinks that Akai Shuichi is dead. (She doesn’t know Shuichi pretended to be dead.) Meaning, she doesn’t know the fact that Akai Shuichi is Okiya Subaru, although she has met Okiya Subaru a few times. 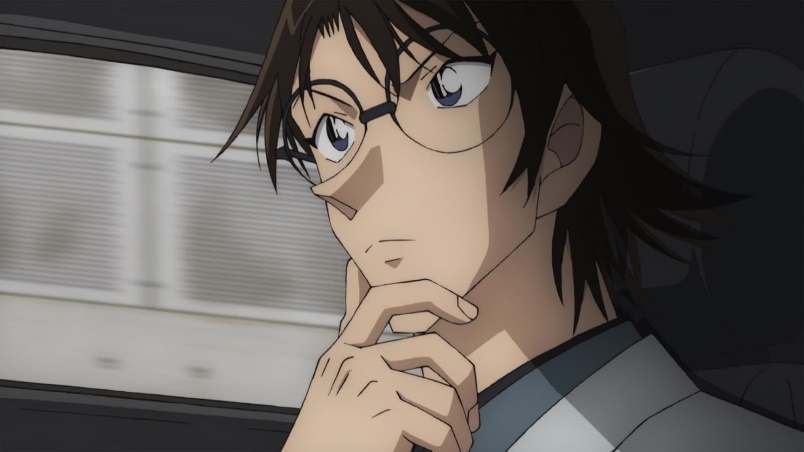 https://goodsrepublic.com/product/tag_page.html?tags=229437
He is the second oldest boy in Akai Family.
After he graduated from high school, he was adopted to Haneda family, due to a certain circumstance. Therefore, his last name is not currently Akai. He is a professional shogi player, having won so many titles. He is not deeply involved with incidents regarding Akai Family; however, he sometimes offers some detective hints when he is asked.
He keeps in touch with Shuichi and Masumi. He knows the fact that Akai Shuichi is Okiya Subaru. (He also knows that Shuichi is an FBI agent.) He knows almost nothing about how his mother is currently doing. (He knows that she is alive, though.) 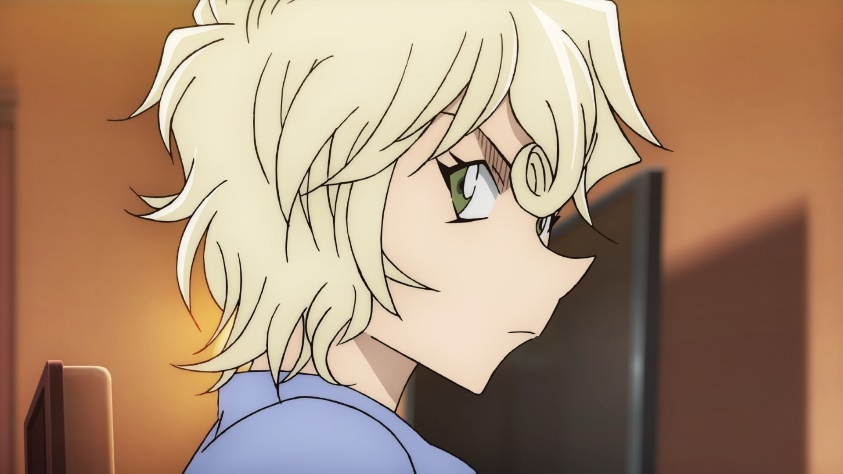 https://goodsrepublic.com/product/tag_page.html?tags=229441
She is a mother of Akai Family.
She is a half Japanese and English. She used to work at MI6 with her husband. She should be around 53 years old but she has been deformed just like Conan for some reasons. It looks like she has been taking actions for a certain purpose but she goes to several hotels and stays without letting anybody know how she’s been doing.
She thinks that Akai Shuichi is dead. (She doesn’t know Shuichi pretended to be dead.) Therefore, she doesn’t know the fact that Akai Shuichi is Okiya Subaru, either. She hasn’t contacted with the second oldest son, Shukichi, much, but she looked so happy when she saw him having won for the shogi competition.

If you know all these info, you will smoothly enjoy the movie! Since it was originally scheduled to release in 2020, some of the info might have been updated……? Well, if you want to know, check out the comics! 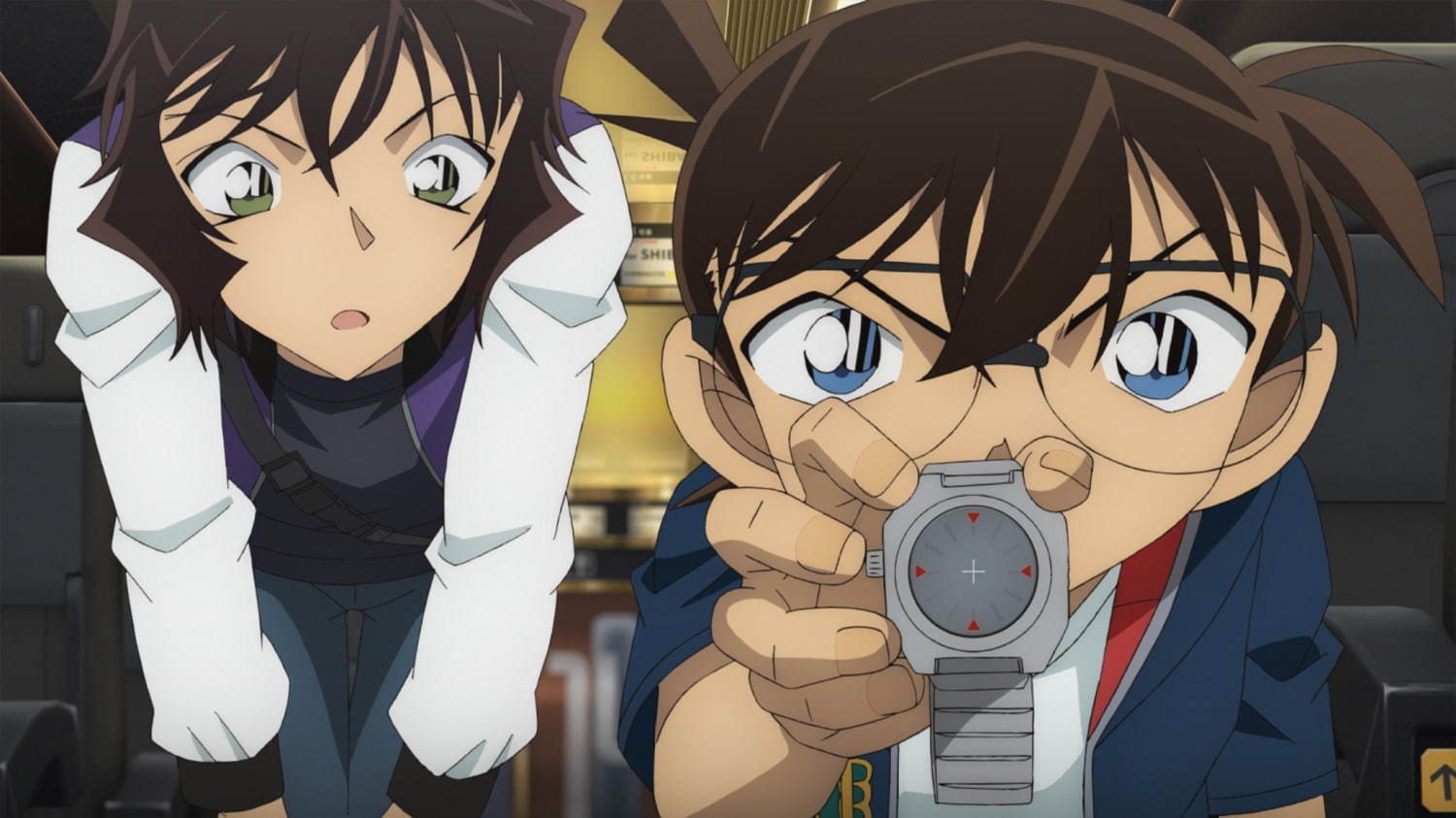 I have to say that the best part about this movie was the “relationship of Akai Family and how active they play their roles,” rather than focusing on the truth and reasoning in the movie!

It doesn’t mean that the truth or the criminals were not hot enough (actually, I was amazed at the truth in climax) but I really liked how Akai Family approached to ongoing incidents!

I rated 73% for how tough Conan got but it was such an overwhelming pinch that he got. But how can I describe…… I somehow got relieved to know that Akai Family was such powerful members……! To me, I felt “What on earth will the Akai Family do next?” rather than, “What’s gonna happen next!?”
For Akai Family lovers, you should watch this movie! We were able to see the relationship, which wasn’t described in the main story, which satisfied me! 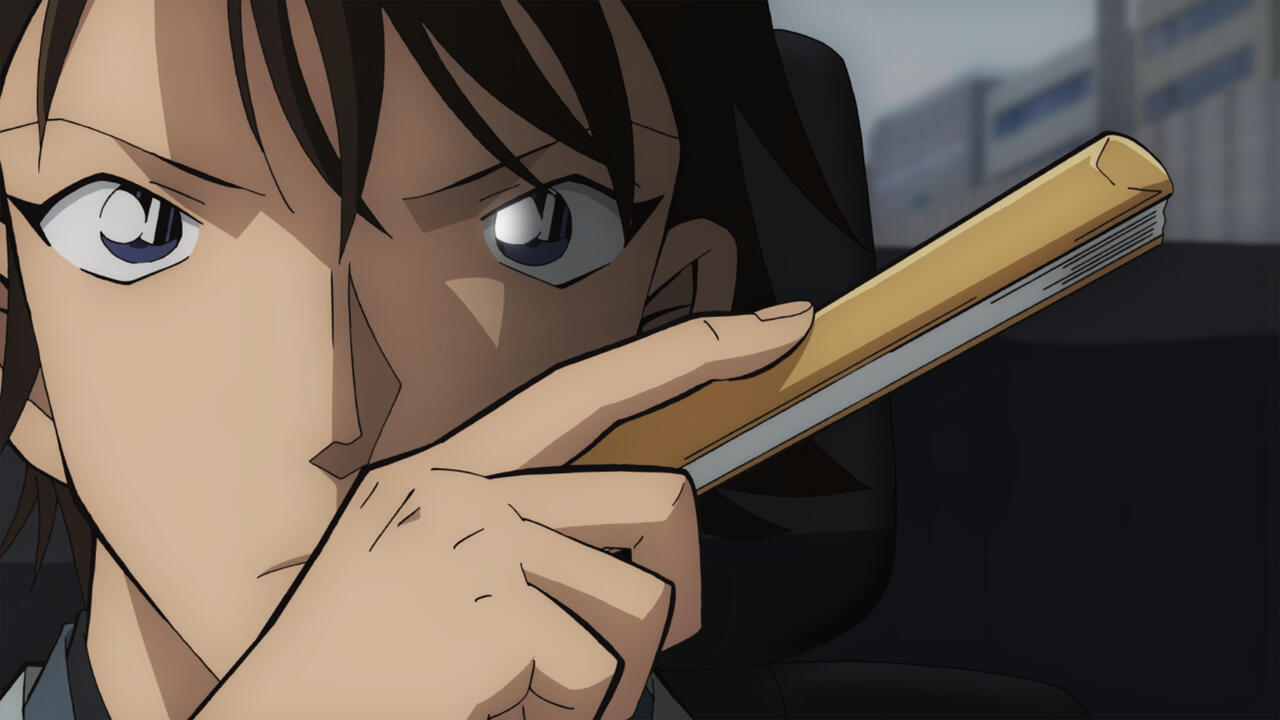 And of course…… there was an announcement about the movie releasing next year too!

(I will avoid saying directly but) It was very unexpected!
I was like…… Whaaat!? The next one is going to focus on that chara?? Honestly, I cannot predict what kind of storyline it will be now! They say the next release will be around May 2022! Can’t wait! Exciting, huh??

So! The one-year-awaited movie Conan was the one, where we enjoyed it and admitted that Akai Family was the most powerful family!
Since I love Akai-san, I thought it was great! So you guys! Why don’t you check out how active Akai Family played in the movie at the theater?
Now OVER 20,000 Items!
Check HERE for Meitantei Conan (Case Closed)’s Merch!